REPRODUCTIVE ABILITY AND PRODUCTIVITY OF COWS FOR THREE LACTATIONS, DEPENDING ON THE AGE OF CONCEPTION OF HEIFERS

In research and production experiments on 911 cows of the Holstein (H), Ukrainian Black-and-White (UBWD) and Ukrainian Red-and-White (URWD) dairy breeds, their reproductive capacity and milk productivity during the third and three lactations, depending on the age of the fetus, were studied calving heifers.

The average duration of the service period (SP) was 130 days, and the lactation period (LP) was 334 days in the cows of the State Enterprise "Chaika" of the UBWD breed for the third lactation. Milk yield was equal to 8334 kg with a fat content of 3.78%, and daily yield of milk was 24 kg. The best were cows that were impregnated with heifers at the age of 12–18 months.

For three lactations, the average duration of SP was 154 days and LP was 361 days, and the milk yield was 9315 kg with a fat content of 3.78%. The daily yield of milk was at the level of 25.7 kg. Younger cows had the best performance.

Experiments proved the economic feasibility of inseminating heifers at the age of 14–18 months, and well-developed heifers at 12–13 months, which positively affects the reproductive capacity and milk productivity of cows. 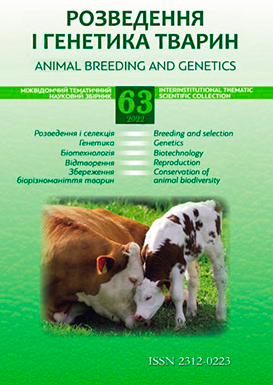