Effective management of dairy farming requires the creation not only of highly productive herds, but also to increase the fertility of cows and their long-term productive use. Although cattle have a long biologically possible longevity, but in practice this potential is not sufficiently used.

We were tasked to study the reproductive capacity and milk productivity of Holstein, Ukrainian Black-and-White (UBaWDB) and Ukrainian Red-and-White (URaWDB) dairy cows for the first two lactations, depending on age and live weight during insemination of heifers. It is planned to continue the study during the long-term economic use of cows.

Research and production experiments were performed on cows of Holstein, UBaWDB and URaWDB breeds of the first two lactations of CJSC "Agro-Region" and SE "Chaika" taking into account the results of our previous research on breeding, age of fertilization and live weight of heifers.

According to personal research and zooveterinary records, physiologically normal calvings occurred in 72% of cows and in 19% of cases the assistance was provided by 1–2 people, and in 9% of heifers and cows the births were difficult and required qualified veterinary care.

1. The influence of the age of heifers of Holstein, Ukrainian Black-and Red-and-White dairy breeds during fertile insemination on the indicators of reproductive capacity and milk productivity for the first two lactations has been studied.

2. The optimal age for insemination of heifers should be considered 14–18 months with their normal individual development and live weight of 360–380 kg.

3. The duration of the service period in cows with a normal course of labor and postpartum period is 100–120days, milk productivity of Holstein cows – 8–10 thousand kg, UBaWDB – 8–9 thousand kg, URaWDB – 7–8 thousand kg. 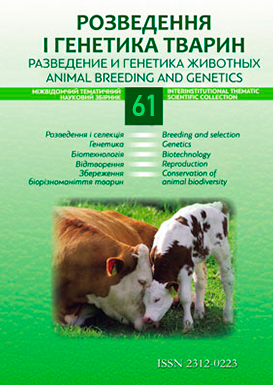