The research was carried out according to the materials of pedigree records of 10 breeding farms for breeding Ukrainian Black-and-White Dairy cattle. Following the requirements of the Instruction on grading cattle of dairy and dairy-meat breeds, regarding the distribution of local animals by generations on the basis of the conditional share of blood by breeding breed, cows in these herds were divided into 5 groups with the corresponding conditional share of blood by Holstein breed: group I – 50.0–74.9%; ІІ – 75.0–87.4%; III – 87.5–93.7%; IV – 93.8–96.8%; V – 96.9% or more.

During the second lactation, the hopes of cows of groups II–IV did not increase in comparison with group I with the increase in their genotype of conditional blood by Holstein breed. Cows of the I group exceeded the expectations of the representatives of the II group by 277 kg, III – by 125 kg and IV – by 264 kg, but were 237 kg inferior to animals of the V group. The amount of milk fat during the second lactation did not depend on the conditional blood by the improving breed and was the highest in individuals of group I – 244.2 kg, respectively.

During the third lactation, the largest amount of milk was obtained from cows of group V – 6654 kg. In turn, this lactation is also characterized by a decrease in milk yield in cows of groups
II–IV compared to the first and V groups. It was determined that cows of group I produced 277 kg more milk than representatives of group II and 260 and 415 kg – III and IV groups, respectively. The obtained amount of milk fat did not correlate with the conditional blood of cows by the breeding breed.

During the IV lactation, cows of the experimental groups produced from 5880 to 6879 kg of milk while maintaining the trend of uneven milk yield depending on the influence of conditional blood in their genotype of Holstein breed. It was found that cows of group I for 305 days of the fourth lactation produced 6173 kg of milk and outnumbered only representatives of group II (293 kg), but inferior to individuals of group III by 23 kg, IV – by 297 kg and V – by 706 kg. Group V cows were also characterized by the highest amount of milk fat in milk.

It is established that only from V lactation a clear dependence of yield cows on conditional blood for the improving breed. Thus, cows of group I produced 301–1613 kg (p < 0.01) less milk per lactation than individuals of other groups, whose conditional blood content by Holstein breed was higher. A similar trend is set for the amount of milk fat.

Dairy productivity of VI lactating cows, similarly to V, has a clear tendency to increase with increasing conditional blood of Holstein breed in their genotype. Cows of group I in terms of milk yield were inferior to representatives of group II by 1052 kg, III – by 1179 kg, IV – by 1395 and V – by 2257 kg (p < 0.05). The amount of milk fat was consistent with the amount of milk obtained.

It was found that in local cows with a conditional share of blood for the improving breed at the level of 50.0–74.9% of hopes increased from I to III lactation.

In cows with a conditional share of blood by Holstein breed in the range of 75.0–87.4% of hopes increased from I to III lactation, with a further decrease in productivity from IV to VI lactation. The amount of milk fat correlated with the milk yield per lactation in cows, a statistically significant difference was found only between the first and second lactations.

It is determined that the content of the most high-blooded Holstein cows of the Ukrainian Black-and-White dairy breed, the conditional share of blood which is 96.9% and above is the most economically advantageous for milk production, as they increase milk productivity from I to V lactation. 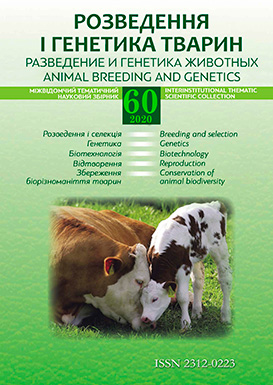